Iron Fists come to fisticuffs with the Goliaths

With another long absence that doesn't really reflect the amount of hobby I've been doing, I've begun to convert a necromunda gang. This time round, with the new rules from Games Workshop, I'll be doing the Orlocks with the gang 'The Iron Fists'.

House: Orlock aka: The house of Iron.

Motto: Iron Fist! Iron First!
Build: With house Orlock participating in many ore runs through the wastes, only the strong survive to anything resembling age. In the Iron Fists the few older gangers are all experienced veterans of these ore runs, and are less suitable for the rigours of waste runs, so have dedicated their efforts to protecting house assets within the Hive.

Models completed so far (or almost...)
The leader of the Iron Fists, the Iron Fist himself. For now this is a nickname/title as I haven't come up with a suitable actual name for him. Below is a picture that I cunningly took in front of my computer screen. There's a little bit more greenstuff work to do in places, and I'd like to give him a shotgun poking out from under his overcoat if possible. 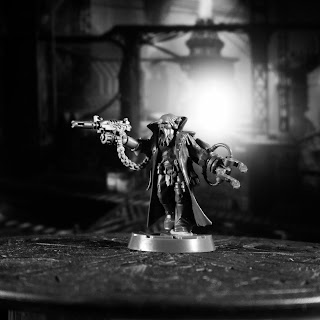 With our local club beginning a campaign, I'm going to need to move fast with this, though I have two extra models ready to go, and some proxies from my old Orlock gang. This let me have my first game of the campaign against the organiser, Irish. Unfortunatly for him, he rolled nothing but 1's and 2's for most of the game, and only managed to take my leader out with some tactical card trickery. In return, I managed to take out or pin over half of his gang, and he wasn't able to sabotage my territory before he voluntarily bottled.
Early on in the game, I knocked 1 of Irish's gangers off 2 floors of hive structure. He quickly learnt that shotguns and ledges don't mix well as he managed to pass a couple of lucky initiative tests (must be all the low rolls....) in addition to the poor fellow who fell. 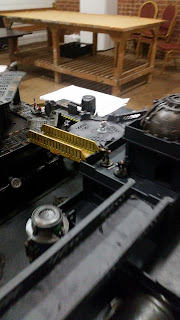 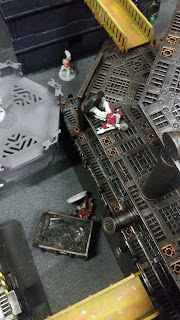 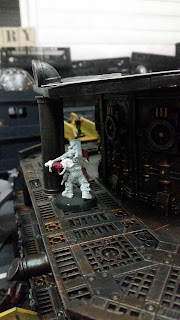 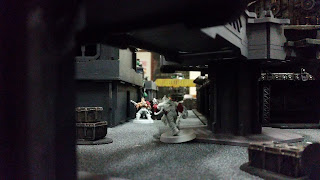 And that's all for now folks. Hopefully back with some more Necromunda soon, as well as a top secret project involving some overly large Chaos Marines