March 15, 2016
On Sunday I had a game of war of the roses using three lion rampant rules. This time we used the house rule that lets you move friendly units within 3 inches of each other. It was my first time playing like this, though my opponent brad has played a game like it before. Over all I think it works well and certainly made deployment more forgiving. While the added strategy from having to keep 3 inches between friendly units is interesting I don't feel that it adds to the game. It's certainly frustrating when you can't get a unit into combat because they can't get to choose to friendly units.

At this point Brad conceded the match, though we played the last turn to see if he could batter my unit holding the square. He failed (like a lost of his dice rolls in this game) and we agreed that I had the numerical superiority on the square and he'd have struggled to keep me from gaining the last point anyway. 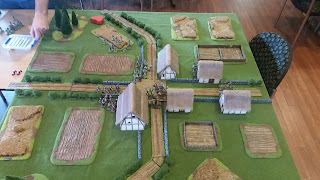 Overall a good game (for me) and terrible luck for Brad as he failed a few crucial turn activation's and I managed to pass most of mine. The few times I failed to activate didn't impact my movement too much.
battle report historical war gaming Lion Rampant Perry miniatures War of the Roses