Skip to main content
May 29, 2011
I started working on a potential Golden Demon entry this week. I've only entered once before and want to set a goal to get some entries done to improve my skills. Currently converting a chaos warrior hero to have a spear instead of a second axe. I plan on adding bear fur, skulls and totems to it.

I'm still lost for ideas on the base though. At the moment I'm thinking he would look good in a ruined building/village. It's not something I see much of in the fantasy setting, so if I go with that I'll put paving stones down, with some charred timber and fallen stones, possibly some nick-nacks (childs doll, bottle, bones?) from a day-to-day village life. 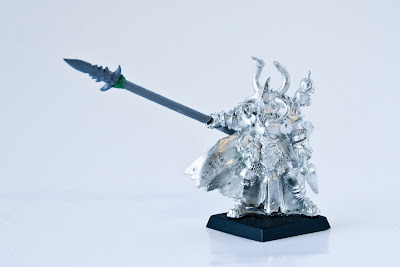 And now that the rest of the Dark Eldar models have come out I've been inspired to convert my Archon. My plan with the Dark Eldar is to have a small core of Kabalite warriors and Archon (with attendant Incubi bodyguard) who are indebted to a Haemonculi coven which is in dire need of slaves. The Kabalites and Incubi will provide the controlled part of the force that goes in to round out the slaves, whilst the rest of the army will consist of wracks, scourges, pain engines/talos and possibly some grotesques.

As the force will be themed around catching slaves, I'm planning on giving the Archon a spear/hook thing for catching them. Origionally planning on having the spear in the pistol hand, but it could go in the sword hand too. Hmmm, I need to mock it up some more I think. 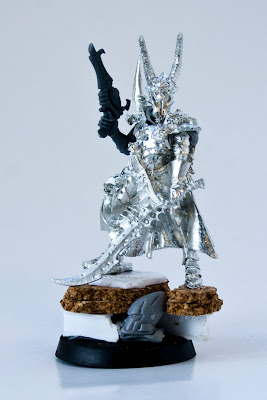