The Bearer's of the Word

July 23, 2016
With my impending move to Australia coming up, I've been horrendously busy, not just with packing, but also with work giving me a large project that was then left almost entirely in my hands as two key senior engineers left, as well as one of the replacements. With all that, I've spent the last two months working a lot of overtime, as well as organising my move and trying to get a few projects finished, at least to the point where I could pack them away.

The first of these projects was my Word Bearers. While I had a lot of these models done to a stage I was happy to call complete, part of this project was always intending to be a learning project to teach myself some new techniques for painting armies fast. While my painting is decent enough with single models, I rarely finish an entire project as it takes so long that I've generally lost interest by the time I get to the last units.

As the word bearers were purchased mostly assembled for cheap from a friend, I decided that I'd just tidy them up, paint them red, ink, drybrush two highlights, then paint metal and 1-2 spot colours. This plan has worked pretty well, with the exception of adding in a weathering stage (part of the learning new techniques) by sponging some battle damage.
As I was nearing the completion of some of the models I also decided that I wanted to try to use some weathering pigments on my vehicles. Obviously if I did that to just the vehicles then they wouldn't match the infantry so I set my first goal. Finish a squad and I could weather my first vehicle. Part way through I acquired some 32mm bases, so ended up rebasing the marines as well...

Eventually though, I've managed to complete a squad of Word Bearers, their transport, and the Dark Apostle. I'm pretty happy with how the infantry turned out, though I think the rhino is a little heavy on the dust and it looks more like dried mud at this stage. Ah well. It matches and they're complete. 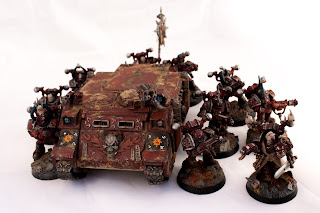 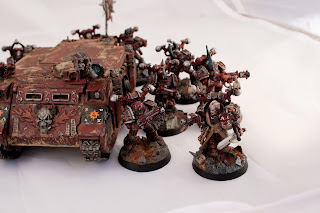 And below are some incomplete squads.

And as my computer is currently on a ship headed to Australia, I'll hopefully have plenty of time to finish the rest of the cultists and hopefully another squad of marines before it arrives. More updates to come.