February 19, 2012
With the last tournament over, and some sleep caught up on, it's time to start some new projects. After a bit of a cleanup I've rediscovered my high elf dragon that I purchased second hand. It's been sitting there while I eyed it's broken wing with apprehension. I've never painted a monster model before and this one came with a broken wing which I was dreading fixing as it was filled with old glue and the broken 'pin' that's molded on the wing.

I managed to clean most of it out with a knife and scraped the wing stump back so that it fit neatly in the socket again. A couple of brass rod pins and it's fixed. I then cleaned up the base, added some spare bits and textured plastic, and I've undercoated it ready for painting. As I've only done one monster before,  (And I recall it being a rush job) I thought I'd try using my airbrush again, at least for the main skin colour and the wings. Hopefully this will speed the process up a bit. 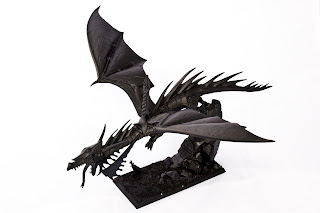 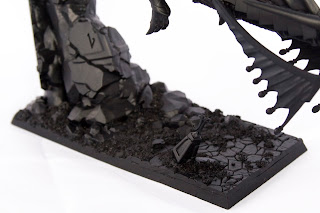 The other thing I've been doing is getting some parts lazercut from mdf. I want to get some high elf terrain made this way so that I don't have to spend so much time cutting little details out. As part of a test cut I've got some bases for my empire army war machines made. These are 80x60mm and 4mm thick. At that size I've got plenty of space to do some modeling on the bases, as you can see with my rocket battery. 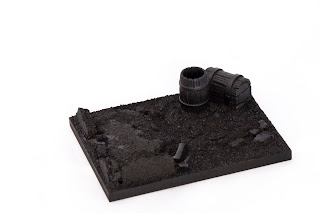 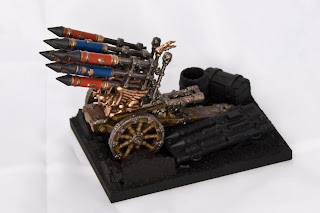