September 18, 2012
It's been quite some time since I've done much in the way of modeling. However, I seem to back into it. Partially due to a couple of tournaments coming up Carnage - 30th Sept, Conquest 20th Oct), and partially because I want to move onto some new projects.
The new projects include; Warhammer 40k - Chaos, the new Spartan Games 28mm game which has some fantastic looking new models as well as some slightly different games (for me) like Dust and Infinity. I'm still not entirely sure if I'll take all of that on, but I'd like to branch out from Games Workshop games.

On the to do list is:
Empire - Finish off at least 1000 points for Conquest (Finish painting/highlighting, flock and varnish)
Dystopian Wars - Finish off 1000 points and get my Blucher Class Dreadnaught and my Skyfortress.
Beastman Minotaur Lord - Taken on as a commission for a friend, I need to get it assembled and basecoated by the end of the month, and then completed by Conquest.


And not all has been unproductive. I've managed to keep my empire ticking over in dribs and drabs.

This is part of the terrain that I've been working on for my 'empire set' of terrain. It's painted, though I didn't base it before hand, so now I have to be extra carefull when I do the base. I should be able to hide any overspill with undergrowth/vines and boxs/barrels that will add more detail to it. 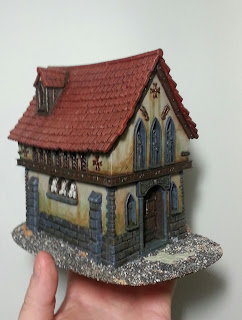 This is a conversion for my Empire battle standard bearer that I've had planned since I started the army. It is quite a daunting conversion though. Tonight I've glued the standard pole to the base and the wire support. The wire support has been trimmed and I've done a little greenstuff work around that hand that is waiting to set. Eventualy I want to cut his left arm off and lift it so that it can rest on the top of a double headed axe. Below is a WIP as I bent the wire to support the staff. 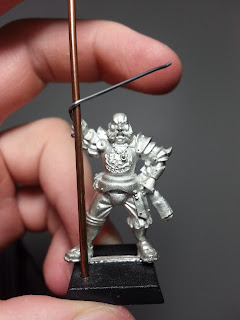