Skip to main content
May 23, 2013
Well with all the lead up to Ides of May out of the way, it's time to show a little of what I got done for that. Below is the work I've done on one of my great eagles. I've only done the dark wing tips on this model, but need to get the other one done too. I'm debating on whether it needs white feather tips in a 'ring' around his neck at the moment too. I still have to finish the beak and claws too. 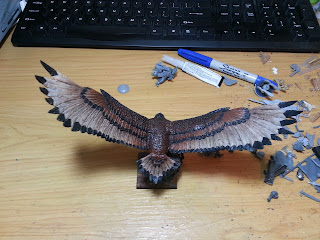 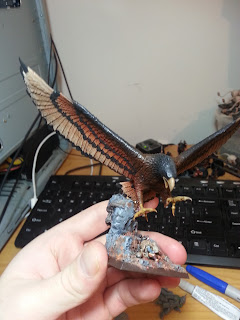 I also managed to scrape together enough war lions from the High Elf chariot to make a unit of 5. The rules for these came from the Storm of Magic book which I've noticed has a lot of fun looking and themey units for armies (Cold ones in a Dark Elf army anyone?) as well as some sweet looking rules for scenarios. I'd love to try out the wizard duel cantrip in a scenario similar to the old hero duel at the start of the game, or by using magic dice to disrupt the enemy magic phase.
Anyway, the war lions were great fun to use in the High Elf army. They're not hugely effective as they are, and tend to die to a beast every game, but they go in and eat a few people first and they don't cost much compared to most the elf units.

I also got the airbrush out to undercoat these. I started off with a graveyard earth and added bleached bone till I got them light enough. Then I took the inks to them to create the shading. It worked reasonably well although at one stage I used to wrong ink (Agrax earthshade) which I discovered is a bit too dark and went back to using layers of Reikland Fleshshade. The manes need a bit of a drybrush and I need to finish all the armour, claws, teeth, eyes and fabric on them, but so far I'm reasonably happy with them. 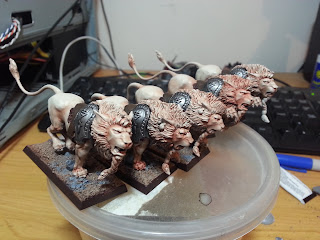 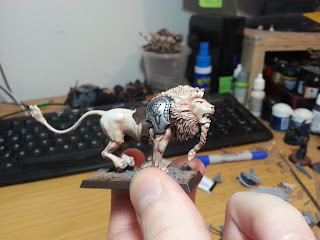