July 22, 2015
Like everyone else who play's fantasy, I've been following the Age of Sigmar stuff with some interest. After all, I have been involved with this hobby for nearly 10 years now.

I've played about 3 games before my game this evening, but all of those we decided to just take our existing fantasy units and throw down a similar amount of warscrolls. The game works like that, but I felt the units seemed clumsy and hard to move around. Especially with 40+ models in a unit.

Tonight I tried a game where we picked up to 6 warscrolls with a 50 wound limit. We modified this at the start of the game to be 60. I felt that this played a lot more fluidly, than the games were we had larger units.

The game was pretty simple. My opponent took Dark Elves and I took my High Elves, which I hadn't used in AOS before. My opponent has been building this army for a while now and hadn't even had a chance to play 8th edition, so it was a new game entirely, for him. With that in mind, we ignored the special building rules, and the terrain setup rules. We set the table up so it looked nice.

Anyway, on to the pictures. 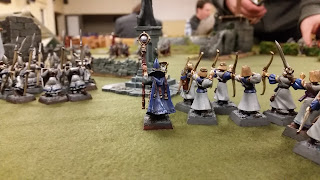 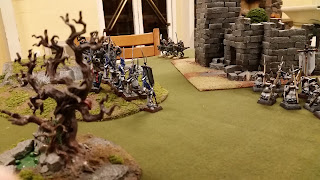 Over all a very fun game, though George did deploy his Witch Elves on one flank which meant I could refuse the flank and focus down his army a bit.

Things I learnt;
1:   Themed characters go well with themed units. And by this I mean the Lothern Seaguard go well with a Seahelm, and Hags go well with Witch Elves. It seems that all of the characters for a certain type of unit make that unit type better.

2:   50-60 wounds is a nice sized game, It makes you think a little about your unit choices. Having 6 warscrolls worth won't always be the best choice. Some units, particularly horde units seem to get bonus's for larger units, which makes up for the fact that units like Chaos Warrriors are elite and tough as nails.

3:   Shooting is awesome. Lot's of terrain is good for this I think. I'm unsure on how hedges work for cover, but feel like the rule that Lion Rampant (historical rules, similar in play style) uses would make an excellent house rule. That is, you can only gain cover for hedges and intervening units if you're within 3inchs of it. This is to allow for arrow's arcing over the hedge. When you're close you get cover, if not, then none.

4:   Hero abilities are fun and make certain units absolute tarpits. Making sure my Elven Spearmen unit didn't take battleshock tests while they were locked in a 3/4 unit combat absolutely saved me a lot of unnecessary casualties.

On to other things. I have been painting. As per normal I have plenty of projects on the go, and I'll try and get some photographed and uploaded.