February 08, 2016
10 years or so ago (my god, where does the time go), I started my high elves. It took me a while to get the direction from what i recall, but I went with a traditional white cloth, blue details, and then I went with purple as a third colour. Purple because I thought it was different and because it wouldn't stand out so much from the blue. It worked well enough and I put a lot of time and effort into the army as well as doing some freehand on banners etc. However after 10 years of gaming the white was wearing thin and undercoat could be seen in places as well as where the models had been scratched and chipped. Over half the spearelves had lost their shields and some of the symbols had fallen off.

With that in mind and the fact that my skills had improved I started updating the colour scheme and repairing the damage. I didn't want to put too much more work back into them, so the solution was to repaint the white as grey (easier to paint) and touch up the blue, metal and purple. However I didn't know what colour to do the white part of the shields. On one hand I could leave them white and just stick them back on, but it didn't really fit with their new grey robes. If I painted the shields grey it was going to take a similar amount of work as the white and I'd have to paint around the symbols.

Then one day I was flicking through the High elf heraldry book and it hit me. I could change the symbol, and the shields. I had a fair idea that I could just 'pop' the symbols off by sliding my hobby knife under them, as they'd been super glued over paint and the glue deteriorates over time. Then I could sand the shield back, and repaint.

With my new plan, I set too it. As most of the shields were scattered through various bits boxes and army cases it took me a while to find them all. But the plan went more or less as planned. Symbols popped off with hobby knife. I used the airbrush to undercoat and highlight them blue. Then I did the same with the symbols and 'attempted' to airbrush them gold, however the gold did not like my airbrush. I think I need to look into paint extender to help with that.

Below is a selection of photo's of some of the designs i liked from the heraldry book. In particular the thick stripes and diagonals look good too me. As always simplicity is king. 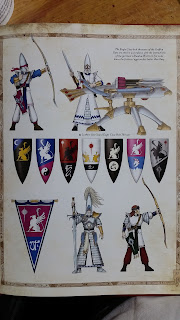 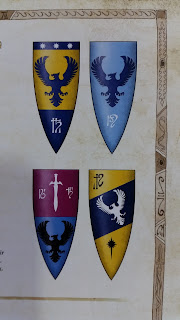 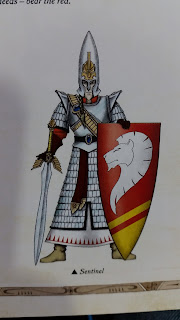 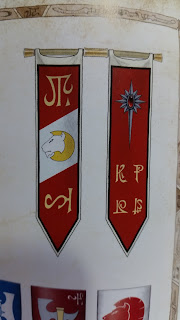 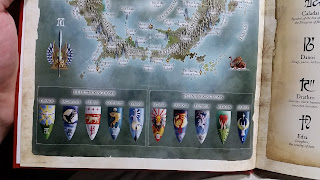