City of the Damned! Tournament edition.

June 19, 2016
Southcon. My first tournament. Way back when I started studying, I moved to the 'big' city of Dunedin and there I discovered there were actually other people who played wargames. It's been a few years (10+....where did the time go!?) since then and the scene has changed a little. This year they ran Kings of War instead of Warhammer 8th edition or The 9th age. And as one of the long term locals down there doesn't play Kings of War either, they decided to run Mordheim as an event. This pleased myself, Alan (the spud farmer) and Alex (the damned frenchie) enough to enter.

As is usually the case when I enter a tournament this meant I needed to clean my desk, my room, start several projects and then look at my Mordheim gangs and figure out what I needed to do to make it tournament ready. I picked the Witch Hunters as they were the closest to being finished. All I had to do was make several alternate models so that I had spares to add into my warband as the weekend went on.

So below we have a witch hunter with axe, crossbow pistol and sword. The model bits used are Dark Elf legs, Empire Great Sword torso and Bretonnian head. Empire arms and a Dark Elf repeater crossbow to use as a crossbow pistol completed him. 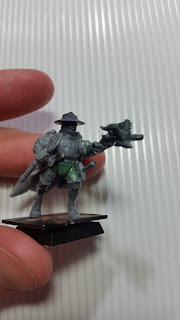 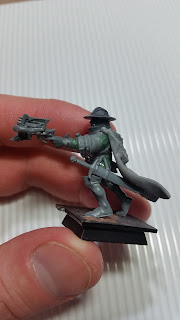 Second up we have Lycelle the Bretonnian witch hunter. Lycelle has traveled the old world from Bretonnia to the Empire hunting witches as vengeance for some traumatic experience from his past. All that remains of his country of birth is a poncy hat and a bretonnian shoulder guard in the shape of a shield with a fleur de lys on it. He's armed with a crossbow and a blade of some sort. Model parts used are Dark Elf legs, breastplate and some empire bits, from the war machine box, pistoliers cape and militia set. 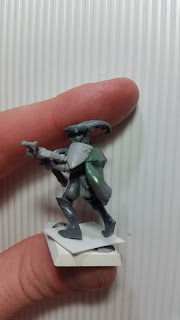 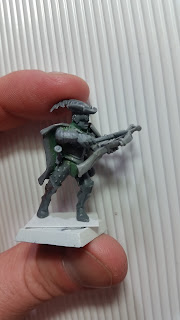 While I was working on my models I also managed to complete some of my terrain that I've been working on for our local mordheim games. Once it was complete I enlisted Alan's help and we spent a night undercoating his terrain as well as mine and making sure it all looked the same. 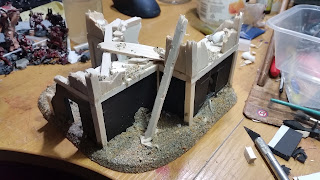 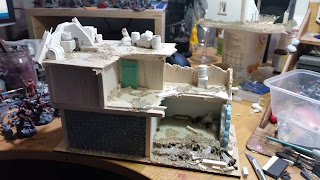 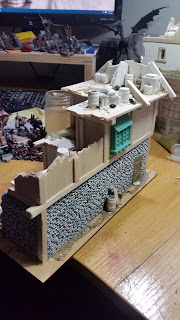 Once we reached Dunedin we discovered that there would be 6 players on the first day with another joining in on the second day. This was great and turned out to be a fantastic weekend of gaming. Joel the event organiser outdid himself with extra bits and pieces like town cryer issues, random events, and odd characters wandering into the city who we could hire, or capture during our games to gain us extra loot, maps, ale etc.

As it was a tournament, we started with new gangs and one of the rules that Joel used was that the first two hero's taken out of action would be carrying wyrdstone that we'd found within the city. Once the hero's were taken out of action the enemy warband automatically claimed the extra piece(s). If none or only one of our hero's were taken out, then we got to keep the extra's ourselves. This really sped up the process of earning money and meant that we got decent amount of warband progress as we only had 5-6 games.

At the end of the first day Joel also ran a gambling den at the pits, followed by a bar brawl. These events were great. The pit fight was simple. Any player could challenge the pit fighter by entering one of their hero's into the pit. Once this was done, everyone had a chance to bet with their gold on outcome. I managed to get quite lucky with this and won 50gc. I also managed to shoot the pitfighter in the face with a crossbow pistol when I sent my leader in and gained a level (+1 exp for surviving and +1 for winning)

After the pit fighting we each picked a hero and a henchman group who went to the pub and got into a fight. They were only allowed fists or daggers for this and the last one standing was the victor (me in this case).

For the last game of the weekend we discovered there was a vampire lurking in the graveyard. Each turn he summoned 2D6 skeletons who moved towards the closest figure and attacked. We all rolled off and got to deploy around the graveyard. Our goal was simple. Kill the vampire. This led to various alliances forming and gangs were allowed to deploy close to each other if you thought you could trust your ally.

Overall a fantastic weekend. Hopefully one day soon I'll get a chance to get some proper photo's of the finished warband. It's quite possible I won't get much chance over the next month or two as I'm beginning the process of boxing everything up to move to another country.